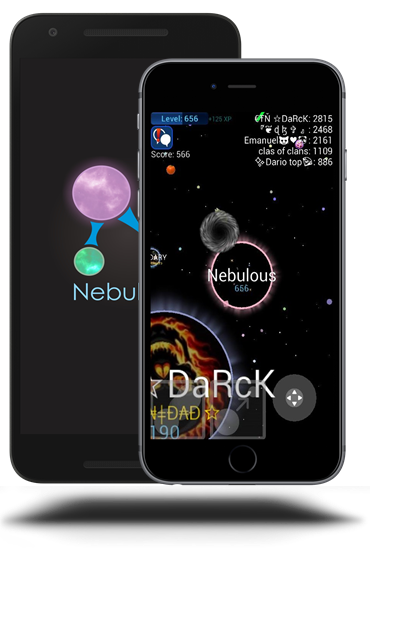 Version 2.2.4
Grow your blobs by collecting dots placed throughout the game or gobbling up smaller players.

Web Core
Grow your blobs by collecting dots placed throughout the game or gobbling up smaller players. Avoid bigger players attempting to do the same. Compete with other players to become the biggest blob.

Nebulous is a really fun online game where you play a little ball floating in space, with which you have to try to absorb other balls that are smaller than you. The challenge is posed by the many other players trying to do the same thing ... and if their ball is bigger, they could absorb you.

Your goal is to make your blob grow when collecting points along the way or absorbing their opponents, forming even larger structures. Escape from opponents who are trying to do the same and compete to become the most giant blob in the game.

The game offers a variety of game modes against people all over the world. Choose from several different rooms with servers all over the world and boarding in disputes with up to 21 different players. Show that you are quick and clever and win each one.

Playing is very easy: just tap the button in the lower right corner to annihilate with their opponents. Also, you can tap the Split button to launch mass in the direction you are moving; and the Eject button, which eliminates some dough toward you (use to move black holes).